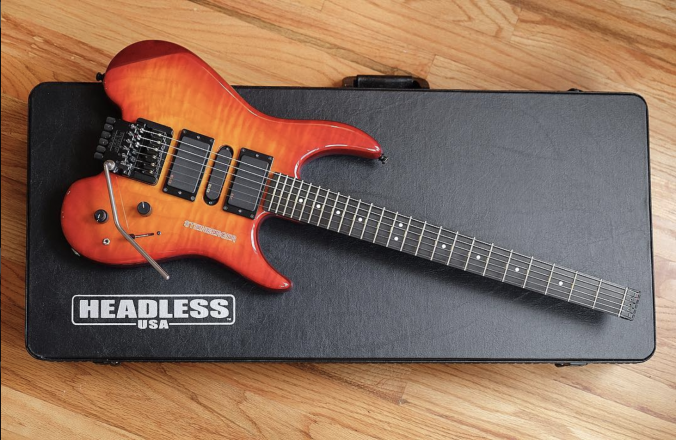 I apologize for the lack of updates in recent weeks; work has been out of control and lots of things are happening on the side as well. But I expect to back on track very soon.

In the meantime, here’s a relaxing jam which was recorded during my Jazz course at Berklee, taught by the fantastic Bruce Sanders. The lead was an improv played by me, the rest was performed by Bruce and an unknown drummer. (I’m planning on taking Bruce’s follow up course, but time hasn’t permitted that, yet.)

The photo is of the guitar used on this recording. I ran it through a Black Finger, and a small Tech21 amp (made right here in NYC. Represent!), into a Motu 828, then the RME Multiface (my sound interface – most highly recommended) and finally into Nuendo. Yeah, I know this sounds crazy complicated, but there are actually good reasons for this signal path. Well, there seemed to be anyway.

If you are familiar with the track Hide And Seek, you know that its a voice-only track, vocoded and layered to perfection by the one and only Imogen Heap.  This little missy just released her new album Ellipse and while I’m still trying to get into it, I remembered that a while ago I tried dropping some beats on Hide And Seek to see how that would sound.  I quickly realized that the tempo of the track is very free-form and unless I busted out a real drumset and mics, getting this to work in a digital domain was going to require some heavy time adjustments.

Enter Ableton Live‘s sick Warp feature.  (Time) warp works automatically by assessing the nature of the track and figuring out where stuff fits on its timeline as well as whether it should create a loop or sections that it attempts to play quantized (in time).  It does a decent job but usually requires manual adjustments even for very straight-forward and repetitive dance tracks.  But as expected, it had no idea how to deal with Imogen Heap’s beat-less jam.  After manually tweaking words into time for a while without totally ruining the the vibe of the song, I dropped a few drum hits under it.  (Admittedly, the first few verses could use further adjustments, but I got lazy.) The plan was to add other orchestration but that never happened (well, not yet).  So I’m posting this here for you to listen to, drop in your editor and mess with further, or whatever.   The BPM is 120.

I hope I don’t get in trouble with IH’s label or the miss directly.  It might be wise to pull this one off asap since it may not last long.

Look for the updated remix at some point in the future, but for now here’s the first draft tagged as in progress.